Criminal prosecution is based on the decision of the Supreme Court of the Russian Federation from 14 February 2003 on the recognition of the Hizb ut-Tahrir as a terrorist organization and banning its activities in the Russian Federation. Under the excuse of Hizb ut-Tahrir members search massive searches and regular interrogations and arrests are conducted in the homes of Muslims.

According to Ukrainian law, Hizb ut-Tahrir acted legally and freely in Crimea. 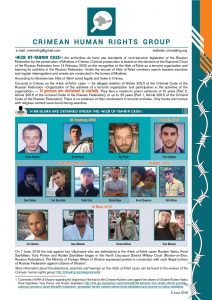