For instance, on August 22nd the VESTI KRYM website published a file titled Bandera Regions of Ukraine Hate Crimea because of Great Envy.

There is no proof for a word stated in the title. The whole file is based on speculations of an ‘expert’ that ‘residents of Lviv area are Bandera men though ready to join the RF at any moment should opportunity appear’. 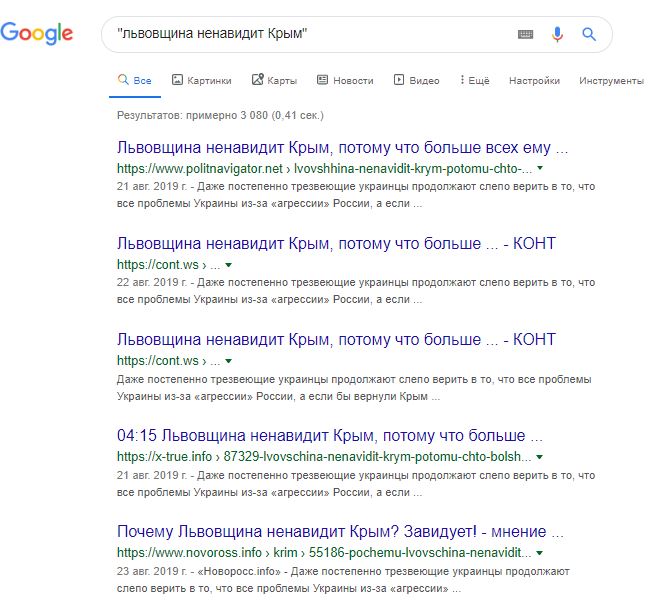 Earlier – on August 6th – one of websites from the list published the article titled Not Killed Bandera Men: Fatal Mistake of Stalin and Beria? in ANALYTICS category.

The article includes statements not proved by any facts and sources. The author is considering the danger of Ukrainian nationalists, that are all residents of Ukraine western regions. In the first part of the article he is telling how the Ukrainians, in early 20th c. ‘raised the weapons proudly showing themselves in ‘vyshyvankas’ (Ukrainian embroidered shirts). Describing persecutions of the Ukrainians by the Soviet power after WWII, the author calls them ‘Bandera garbage’ and states that mercy for them was not justified. The article also contains forms of inciting hatred to the Crimean Tatars and Chechens.

‘The Bandera garbage never stopped fighting with the Soviet people, even for a while. In 1944 – 1945 when the Red Army warriors, not sparing themselves, were liberating Europe and finishing the Nazi beast in its seat, the UPA (Ukrainian Rebel Army) banditti did over 15 thousand acts of terror and subversions. 30 thousands only killed – these are losses due to their villainous deeds! Enormous forces had to be sent to eliminate nationalist banditti gangs and resistance movement whose members were dozen thousands of Western Ukrainians. There were not regiments, there were divisions that the front needed as air to breath. And then, frankly speaking, one may be confused – other peoples who did disgrace themselves in the Great Patriotic war years with a mass scale betrayal and collaboration with the Nazi, were held liable in full. The same Crimean Tatars or the Chechens who deserved the anger the Commander in Chief, indeed, may tell a lot thereof. But regarding the Halychyna people the mercy showed is really unexplainable,’ – the article states.

Then the author of the article calls the present-day residents of the Western Ukraine a ‘not fully killed rats’ and blames them of creating difficulties for Russia.

‘The beast of nationalism not eliminated in full by Stalin and Beria turned out to be much more persistent and poisonous that one could have imagined. It is the Galician (Halychyna) Bandera nationalism that has revived and launched the nightmare Ukraine is now in. And, generally speaking, – the challenges Russia is facing now due to this. Unfortunately, consequences of mistakes made by the great could not be small…’, the publication points out. 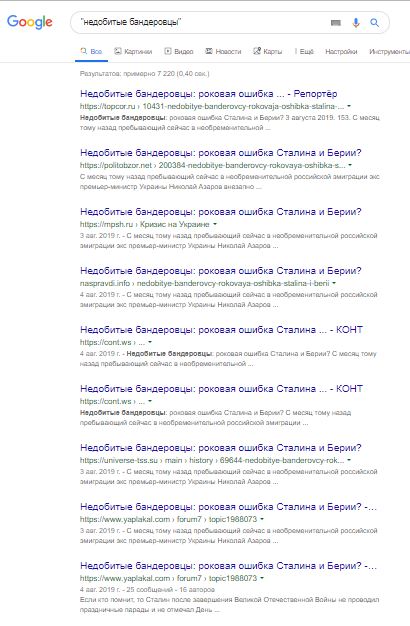 Some of these websites are in the Russian domain space. It should be noted that the article was published even at the websites dealing with selling various goods, dedicated to the youth fashion or health.

A wide dissemination of the article that features the language of hatred among completely different targeted audiences may testify planned actions on inciting the hatred, with numerous Russian language websites of the internet involved.

Such actions result into the further intended hatred incitement between residents of Ukraine and the RF, raise the aggression to the West Ukrainian people among the Russian speaking ones, including the residents of the occupied Donbas and Crimea who are a potential audience of such websites.

The situation escalates also with the appeals to eliminate pro-Ukrainian activists called Banderalogs (one of the interpretations of ‘Bandera man’) published at the Crimean websites. For instance, there has been a thread at one of the Sevastopol forums since 2014 called ‘Burn Out Banderalogs in Our City’. Today the thread has 149 pages already. When discussing, the website users publish personal data of Sevastopol Ukrainians and use the speech of hatred.

Though the RF laws forbid such actions, there is no information on holding liable for inciting the hatred against Ukrainians in Crimea, recorded for 5 years of occupation. Crimean journalists are fined for abusing the freedom of mass media, though are allowed to use the speech of hatred.

The Russian authorities in Crimea neglect the fact that inciting the hatred is forbidden by the international norms on protecting human rights and counteracting the discrimination.

We would remind that the study of the Crimean Human Rights Group showed that the language of hatred was consistently used in Crimea at a wide scale regarding the Ukrainians and other ethnic, religious, and social groups.

For instance, the Novoross.info website mentioned above published an article titled ‘Orthodox Odessites Initiated Cross Procession Against Propaganda of Perversions and Sodomite Marches’ on August 22nd, that incited the hatred against the LGBT community.