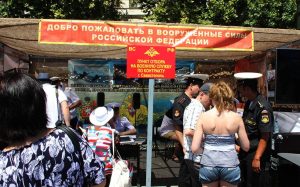 A spring conscription into the army of Russian Federation that the RF intends to hold in occupied Crimea since 1 April, is illegal. As well as all previous and further conscriptions, by the way. The Crimean Resolution of UN General Assembly where Russia is clearly called occupying power has specifically ‘flavored´ this conscription and … given the Crimeans grounds to escape it.

At the same time Russia keeps on drafting the Ukrainian citizens living in Crimea in the occupation army, violating principles of international humanitarian law. The Crimean youth has to either accept and serve or mildly resist.

‘Ins and outs’ of the ‘Crimean conscription’ were discussed by QHA journalist with Ms Olga Skrypnyk, head of Crimean Human Rights Group.

– Representatives of the Occupational Powers in Crimea announced increasing the number of Crimeans to be drafted during the spring conscription to the Russian Army. However, the UNGA Resolution on “Situation of human rights in the Autonomous Republic of Crimea and the city of Sevastopol (Ukraine)” adopted in December 2016 designates the Russian Federation as an occupying power and Crimea as a temporarily occupied territory of Ukraine. Does the Occupying Power – State have a right to draft the Crimean people that still de juris are considered citizens of Ukraine into its army?

Ms Skrypnyk: Conscription into the army in this case is a matter of international humanitarian law. It is governed, first of all, by the Geneva Convention relative to the protection of civilian persons in time of war, that forbids the Occupying Power to compel protected persons to serve in its armed or auxiliary forces.

The Crimean UNGA Resolution adopted last December contains a clear message: Crimea is a territory of Ukraine occupied by Russia. And this highlights one more that Russia has no right either to draft the Crimeans in its army nor to move them after the conscription from the territory of Crimea to that of RF.

However, even not taking into account the UNGA resolution of 19 December 2016, there is a UNGA resolution adopted in March 2014 that clearly states Crimea is a territory of Ukraine. And this statement leads to the conclusion that this is an occupied territory, too.

Given these two resolutions, we may affirm that the Geneva Convention forbids directly the Russian Federation not only to draft citizens of Ukraine (and all Crimeans remain citizens of Ukraine) in the Russian army. The Convention forbids even a propaganda of such conscription on the occupied territories, i.e. all those advertising boards, various ‘patriotic’ events in schools, universities where the people are agitated for serving in the Russian army. By the way, the interdiction covers not only the conscription but also enlistment.

One may say that Russia commits at least two material violations. The first one is that the Crimeans must not be at all drafted in the Russian army, but they are. And the second one is that if after the conscription the RF moves the Crimeans to serve in the Caucasus or somewhere else on its territory this would be considered a separate crime. Because any transfer of people from the occupied territory to the territory of the occupying power is also forbidden by the above mentioned Convention.

Ms Skrypnyk: I would like to point out the need to use proper wording. We may not consider an unwillingness of the Crimeans to serve in the RF army as evasion of military service since this service is illegal. Dodging conscription is when you evade legal actions while we say that this is an illegal conscription. Therefore, one should say that the Crimeans try to escape (!) the illegal military service in the Russian army.

The number of applications of future draftees to get an advice of human right experts depends considerably on the period. Now, shortly before the spring conscription, the human right experts are more often addressed for an advice, and autumn is also the time when people address.

QHA: Clear. Then can the Crimeans try to escape the illegal conscription to the occupying power army?

Ms Skrypnyk: This is a challenging issue. There are several approaches. One of them is if a person relies upon the international law standards. So a potential draftee may come and say: you, Russia, pursuant to the international humanitarian law, is forbidden to draw me in the army. But then such person may face a risk to become a ‘client’ of the FSB that will initiate a criminal case for, as it could be said, appeals to destroy a territorial integrity of Russia. So though this approach may be applied in terms of international principles we know that Russia may prosecute such people.

The second possible situation is to leave Crimea for mainland Ukraine before a draft notice has been received and to serve in the Ukrainian army.

The third way is linked to the fact that de facto Russian legislation governs in Crimea. So, let’s say, this conscription could be escaped referring to the de facto valid Russian law on, for instance, alternative service. In particular, you may refer to your religious denomination or pacifistic beliefs – and the Crimeans do use this pattern. (It should be noted that pursuant to the Russian laws, an application for replacing the military service with the civil one shall be submitted to the military enlistment office at least half a year before the relevant conscription start. – QHA).

Ms Skrypnyk: It is essential to understand that drafting the Crimeans to the RF army should not be silenced down. The people themselves must obligatorily speak thereof. And Ukraine may, pushing the UNO, demand the UNO to forbid Russia such conscription or take any new actions against Russia to prevent it from calling up our people into its army.

And it is very important for the people themselves to report the notice received since this is a material argument for our Ukrainian diplomatic activities and UN bodies that allows acknowledging illegal actions taken by Russia. Therefore, when people in Crimea receive draft notices to the RF army it would be better to communicate this to the human right experts. To avoid the situation when our people have been silently drafted, moved out from Crimea and sent to serve somewhere.

Ms Skrypnyk: They may address us – the Crimean Human Rights Group or other human rights organisations. We know that many Crimean Tatars who have received such notices address the Mejlis of the Crimean Tatar People to discuss the issue.

Ms Skrypnyk: While collecting the information on infringement cases or military crimes or conscription we guarantee, if necessary, personal data protection. However, it could be just opposite when in case of illegal detention this should be shouted out and the person’s name should be announced to help him somehow. But if we speak about the cases as conscription, then yes, we do not publish any document to protect the person and his personal data.

Ms Skrypnyk: Such cases should be reported to the UN bodies since the Crimean resolution explicitly declares Crimea an occupied territory, Russia has no right to draft the Crimeans into the army. Therefore, the UN bodies are just ones of those addressees to apply to. The UN Representative Office to Ukraine may be informed but one should understand that this organization is unable to protect people in Crimea. It may, if informed about the conscription case, just forward the information further, to other UN bodies.