The Crimean Human Rights Group has checked the accessibility of 27 websites on the territory of Crimea, with 22 among them being Ukrainian information resources including websites of major Ukrainian TV channels.
The monitoring was carried in July of 2017. The accessibility of websites was checked by networks of five different provides in five Crimean cities and towns: BelNet (town of Belogorsk), Sevstar (City of Sevastopol), Triolan (City of Simferopol), Bospor (town of Kerch), Yaltanet (town of Yalta).
The CHRG checked 27 websites which accessibility was limited in full or in part at least in one of the abovementioned cities and towns.

The monitoring demonstrated that 11 websites of the list were blocked out by all five providers. These are: Censor.net; 15 minut; Evropeyskaya Pravda; KRYM SOS, Hromadske Radio, Ukrinform, 5 Channel, Focus, Informatsiyniy Sprotyv, Sled.net; Linkedin, RBC.

It is worth noting that the Roskomnadzor provides the information of only five websites of the CHRG monitoring list blocked on the RF territory due to the court judgements.

The Yaltanet network operator denies access to 26 websites of the list. The Yalta users subscribed to this provider have an access only to Sobytiya Kryma website out of 27 checked by the CHRG. Krym.Realii website is blocked in part (some internet materials are not accessible).

The TRIOLAN, a Simferopol provider, and the BelNet, a Belogorsk provider, block 24 websites of the list. In contrast with Yalta users, these providers keep accessible the websites: Liveam.tv, Toneto, glavnoe.ua and Krym.Realii, though they both block Sobytiya Kryma website.

The BOSPOR, a Kerch provider, and SEVSTAR, a Sevastopol provider, provide access to the higher number of websites. The users subscribed to Internet via these operators are unable to access only 11 websites of the list.

Some websites are blocked referring to the Roskomnadzor requirement. But in most cases the website connection just fails or Error 403 message appears on the monitor. 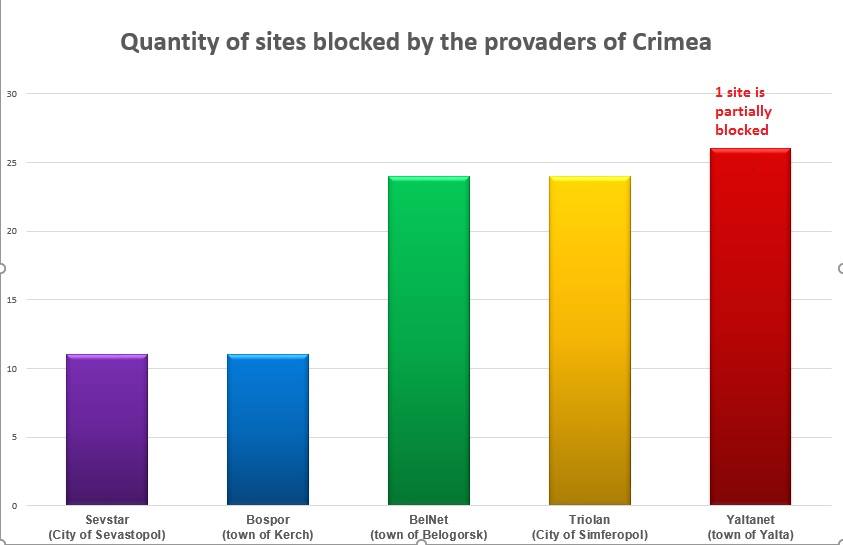 Due to the monitoring findings, one may see that a lot of websites, much more than it was known before are blocked in Crimea. These are mainly websites of Ukrainian TV channels and other resources where Ukrainian news may be published.

Ms Olga Skrypnyk, head of the Crimean Human Rights Group, stated that the monitoring findings had demonstrated and detected the violations of the freedom of speech and expression that were established by all fundamental documents on the human rights.

‘Russia has confirmed once more that it has no intention to respect human rights on the territory of Crimea. Access to information is one of key moments the people need to express freely the opinion,’ the human rights expert pointed out.

Ms Skrypnyk emphasized a selective approach to website blocking: some internet resources were blocked due to the Roskomnadzor’s decision, that may be appealed against by the mass media. But other internet resources are blocked by the Crimean providers due to absolutely unknown reasons. These could be some local decisions that could be highly likely unofficial. Sometimes the access is denied to the entire information resource, sometimes only to special articles. For instance, with Krym.Realii it is a common situation when the access is denied only to some articles while the resource itself is accessible.

‘What does this practically result into? First of all, this is a violation of freedom of speech and expression. Secondly, the people living in Crimea are deprived of opportunity to receive alternative information. They may receive only the information monitored by the Russian authorities themselves via governmental bodies de facto in Crimea. And Ukraine is not the only subject the Crimeans have no information about though this is very important for them as citizens of Ukraine since they have not rejected the Ukrainian citizenship. In addition, the Ukrainian resources that monitor the situation in Crimea very often inform about violations of human rights or any other current issues that are the case for the Crimeans, for instance, the issues at the administrative border. Since the Russian authorities block these information resources, the Crimeans lack the opportunity to be aware of issues that make the case for them more than for the mainland Ukraine. This is a severe threat and one more violation of human rights, a most serious one,’ Ms Olga Skrypnyk concluded.